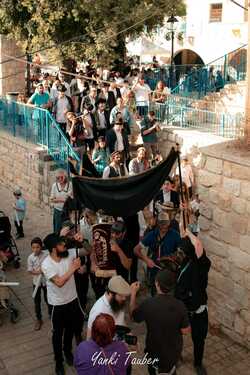 What was a youthful friendship and a shared dream came to fruition this week when the Artists Quarter Minyan celebrated the homecoming of its first sefer torah.

The momentous event  began at Machon Alte, the prestigious women’s learning center founded by Rabbi Yosef and Rochel Leah Rosenfeld. AQM’s Rabbi Zalman and Chana Traxler, sponsor Tomer Benshushan and his family, Chief Ashkenazic Rabbi of Tzfat  Rabbi Mordechai Bistritzky, Dr. Shmuel Yosef Weiss, and a host of esteemed guests led the way for an emotional stream of shul members and guests eager to have a hand in the momentous occassion.

Zalman grew up in Houston, the son of longtime shluchim Rabbi Moshe and Shoshana Traxler.  Basya Grinshtein, daughter of another Chabad stalwart family, had been his classmate since elementary school, and they stayed in close touch. When Basya married Israeli Tomer Benshushan, the bond was strengthened. Tomer had long wanted to dedicate a torah in memory of his father, and had promised it would be placed wherever the Traxlers established a shul.

It took the Artists Quarter Minyan four years to find a permanent home. Minyanim were held in a half dozen locations before the acquisition of the former Shaarei Bina building over a year ago. A burgeoning congregation quickly outrew the space, and with a generous donation from another Houstonite, the Dr. Shmuel Yosef Weiss Center for Jewish Life opened in the magnificent building known as Bayit Tet Vav on Shavuot, 2021. It became the epicenter of spiritual and social life for the growing Anglo community and it’s production of successful community wide events and chesed projects grew.

The AQM had a permanent home, but the Sifrei Torah were borrowed.  Tomer and Basya had already commissioned the scroll from a sofer friend in South Africa, but Covid made its’ delivery extremely difficult. Congregant Miriam Gibor, who  managed a visit to her family, hand carried the scroll home to Tzfat.

It took almost two years from the commission of the Torah until its arrival.  Covid and travel restrictions delayed the dedication until this week.
The large, exhuberant crowd was  jubilant and emotional, particularly for Rabbi Traxler. As the procession passed Kikar Sade, he was overcome by the memory of five years earlier, when he spent his days putting on tefillin with visitors on the same spot.

The day long festivities, which culminated in a lavish, music and dance-filled seudah, was cause for reflection on what the AQM means not only to the congregation, but to Tzfat as a whole. The Traxlers are known for their generous hospitality, and the beautifully decorated space, lovingly created by AQM friend Tirtza Meirav reflected their intent to always share the abundance with everyone.ivka

For Chana Traxler, whose parents Rabbi Meir Chai and Rivka  Benhiyoun were here from Chicago, it was like giving birth twice in a month. The Traxlers welcomed a son two weeks ago, and was enthusiastically enjoyed by shul members and a host of prestigious guests, including Rabbanit Tova Eliyahu, distinguished rabbis and extended Benshushan family.

Donated by the Benshushan family and and lovingly dedicated in memory of Moshe Meir Ben Maimon and Jeanette Benshushan, tomorrow marks the first Shabbat with AQM’s own Torah. It will be the scene of yet another simcha- the ufroof of Shlomo Lebowitz.

“ We have an amazing community,” says Chana Traxler. “We daven together every Shabbos and share our day-to-day life. This kehilla basks in the light of Hashem, and this Sefer Torah is our trophy.” 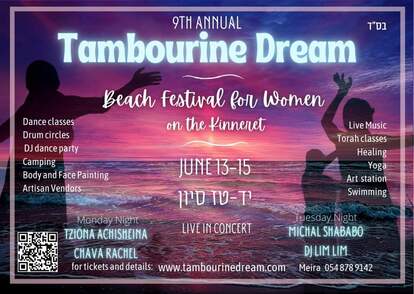 By
Susan Cohen
It was Aviva Spiegel's longing to spend time at the beach that was the impetus for the Tambourine Dream Festival.
Ten years ago, married, with six young children at home, she yearned to be seaside occasionally to rejuvenate her physically and spiritually. Inspired by a talk of the Lubavitcher Rebbe urging women to begin celebrating the Redemption not only through learning and prayer but with music and dance, an idea gave birth to one of the most anticipated women’s celebrations of the year.

A Stanford University graduate and veteran of years of shlichut in both the United States and Israel, activism and organization had become second nature to her. On her arrival in Tzfat, she quickly connected with the women already creating events and initiated creative celebrations for Chanukah and Purim. With her pre-Teshuva experiences of beach parties and Grateful Dead concerts, she conjured a plan to produce a beach side celebration for women encompassing an atmosphere of Torah, music and dance.

With no sponsor or capitol, Aviva was confident that ticket sales would cover the costs of the beach rental, musicians and promotion. She signed on some of Israel's most prolific female musicians- Tziona Achishena, Chava Rochel Saban and Michal Shababo- and secured a location on the Kinneret.

It's been nine years and the dream is flourishing. Women from all walks of life- singles, married and lots of mommies toting their offspring and camping gear, gather beach side for three days of Torah, music and inspiration. This year's celebration brings longtime participants and a host of newcomers eager to join the festivities.

For Tzipporah Modes, it is a welcome respite from daily life. "Last year was the hardest of my life. I had an extremely difficult pregnancy, and could not walk for three months after the birth. I was in a very low place physically, emotionally and spiritually. Without exaggerating at all, the festival changed my life. I was finally able to open up and feel free to be me and totally connected to Hashem."

Bonding with other women and attention to self care is a vital component of the festival philosophy. Says community activist Meira Roome, "The first time I came to the Tambourine Festival, I had three children under three and my husband was serving in the IDF. To say I needed some self care is a huge understatement. My neighbor told me about it and I decided to go with her for a day. I was immediately hooked, addicted to the laughter, the feminine achdus, the Torah classes- even the swimming was uplifting. I was experiencing my own personal geula, and it repeatedly brought me to joyful tears. I have gone every year since, and eventually became involved in the festival's organizational operations."

For Aviva, whose eternal optimism and fearlessness for challenge and hard work is boundless, with Covid restrictions lifted, this year's festivities will be particularly joyful.
"Over the years, as I've internalized more the teachings of Chassidus, the kavanna of the festival has transformed to also reflect a very specific goal- to "birth Geula". The driving force behind the festival is to provide an atmosphere of joy, love and support for women to actually experience levels of quantum healing and revelation of personal truth. I'm addicted to those moments at the festival- during the improvisational dance circle jams, when I get it with my whole being that we're already birthing the Geula. Where will you be and what will you be doing when you experience
that quantum shift in your reality? Step into the Circle- we're ready!