How Can I Take a Self-Guided Tour of Tzfat? 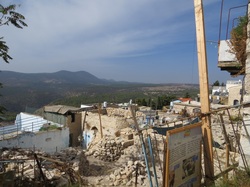 A Self-Guided Walk Through Tzfat 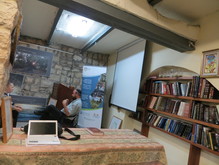 International Center for Tzfat Kabbalah learn, research and explore the mysteries of  the Kabbalah of Tzfat, in a pluralistic way that is accessible all, regardless of religion. Located across from the Tourist Information Center of Livnot U'Lehibanot. 10-minute audio-visual presentation to explain Kabbalah to beginners. Hours: 9:00 - 16:00. 04-6821771

HaAri Synagogue   synagogue where The Ari, R' Isaac Luria, prayed. Next to the Apple Orchard where the Ari initiated the Kabbalat Shabbat service and celebrated it with his students. Hours: open throughout the day 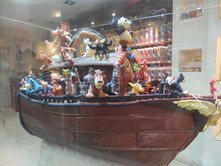 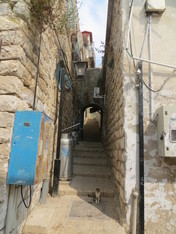 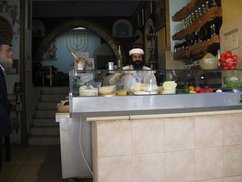 Ronen's Lachuch   Amazing Yemenite food, either to go, or to enjoy in the Azamra complex. Books, music and conversations about everything Jewish. Across the street from the Livnot Tourist Information Center on Alkabetz Street. Open all day.

Cave of Rabbi Yosef Caro The cave in which Rabbi Yosef Caro sat with the "Maggid" (angel) and wrote Shulhan Aruch. Entrance is to the left of the synagogue (walk past a few shops to the stairs) down the stairs. The larger room is the Beit Din -- Rabbinnical Court -- where R' Caro presided in the 16th century. Small donation requested. Hours: 10:00 - 13:00 and 16:00 to 19:00

Tsfat Winery    Winery in the style of wine-making of Safed.  Near the Estam building at the beginning of Yosef Caro Street Hours: mornings.   Advised to confirm visit beforehand.  Moshe (050) 448-0884

Old Cemetery   Cemetery where the great rabbis of Tzfat are buried, alongside Jews who resided in Tzfat over the past several hundred years. Gravesites of rabbis from Talmudic times.​

Ari Mikve    Mikve in which the Ari HaKadosh immersed. Hours: throughout the day and night, only for men. Next to the Old Cemetery. Always accessible. 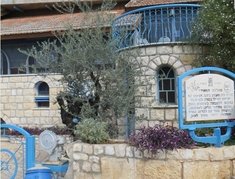 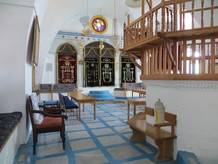 Ari Sepharadi Synagogue  original synagogue of the Ari's time, where the Ari prayed and is said to have studied Kabbalah in a small cave inside the synagogue with Elijah the prophet. Open 10:00a.m. to 19:00 daily

Ascent Institute classes in Kabbalah and Jewish studies, library, computer center, hostel. Ascent also provides Tourism information, Workshops and seminars on a variety of topics (in Hebrew and in English), as well as weekly Shabbat meals and meal placements with local families.  Lending library, screening room, an exhibit on Kabbala, kabbalistic art, free internet, a tea garden and gift shop, and free coffee and tea for visitors. Hours: 9:00 throughout the day and evening Phone: (04) 697-1407

Cave of Shem and Ever 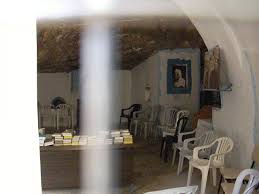 Cave of Shem and Ever    Legend says that this is the site where Noah's son and grandson established a yeshiva after the Flood. On Palmach Street.  Shacharit: 6:00, Mincha: 14:00.  Shabbat Netz Shaharit, after which the kiddush is held in the cave itself.

Sheva Chaya Glassblowing Demonstrations Across from the General Exhibition.  Judaica including individual glass-blown items as well as Hassidic paintings and other Jewish-themed watercolors and artwork. 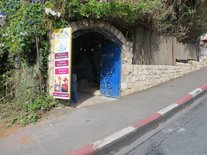 Stam Center -- Learn about the Jewish tradition and art of Sofer Stam, writing ritual parchments.  Learn about Hebrew letters, their origins and mystical meanings. Interactive activities designed to immerse visitors in the actual writings of parchments.  In the northern suburb of Tzfat, Kiryat Sarah.  Phone for appointment  (04) 691-2000

Zoo – birds, horses, donkeys, monkeys and much more, including a small petting zoo. On the edge of the Artists Quarter, NaHasi Street, just past the Rimonim Hotel. Small entrance fee. 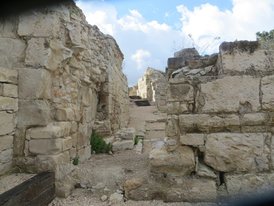 Metzuda/Citadal    highest point in Tzfat's Old City. According to the Talmud, Tzfat was one of the locations in the Land of Israel that would light a fire to alert surrounding communities about the beginning of a new month. Archaeologists believe that this occured on this mountaintop. Remains of a Crusader-era fortress can still be seen. Always accessible.

Artists Quarter --  galleries of artists of Tzfat. General Exhibition exhibits works of Tzfat artists. Next to the tourist bus parking lot, between the Artists Quarter and the Old Jewish Quarter.

Mashiach Lane -- Safta (Grandma) Yocheved used to sit at the top of the stairs of this narrow lane with two cups of tea and two biscuits. She sat there daily for years, explaining that since the Messiah was supposed to come through Tzfat on his way from Meron to Jerusalem, he would be hungry, and would need nourishment. She was there to provide him with what he needed for his journey. The lane is located off of Bar Yochai St
.  ​
Powered by